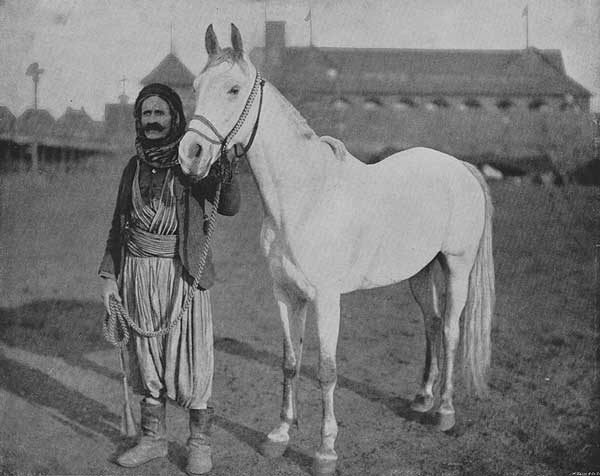 You probably love all kinds of horses but there are a handful of breeds that have that special something that sets them apart. The Arabian is one of them. Its distinctive head, high set tail, intelligence, spirit and stamina make it one of the most impressive breeds today.

The Arabian story may have started more than 4,500 years ago, as archaeologists have found a skeleton of that age which closely resembles the present day Arab. We have also discovered from mitochondrial DNA (mtDNA) testing that all Oriental breeds have common ancestors – with the Przewalski developing first, followed by the ancient Caspian.

Myth Number One: The Prophet Muhammed:

One creation story describes how the Prophet Muhammad (570AD–632AD) chose his foundation mares by a test of courage and loyalty. After a long journey in the desert Muhammad’s war mares were very thirsty and desperately wanted to drink. As they reached an oasis the horses could smell water so Muhammad let them loose. As they raced to the water hole Muhammad called them back. Only five of the mares returned to him. These mares became his favourites and were called ‘Al Khamsa’, meaning the five. These mares then went on to establish the five choice strains of Arabian horses.

Another creation story says that Ishmael, the son of Abraham, is awakened by a wind spout. As the wind spout whirls towards Ishmael the Angel Gabriel commands the thunderclouds to stop scattering dust and rain and they gather themselves into a prancing, handsome horse that seemed to swallow up the ground. From this story the Bedouin call the first Arabian horse ‘Drinker of the Wind’.

Another Bedouin story has Allah (God) creating the first Arabian from the four winds - spirit from North, strength from the South, speed from the East and intelligence from the West. While doing this Allah said, “I create thee, Oh Arabian. To thy forelock, I bind victory in battle. On thy back, I set a rich spoil and a treasure in thy loins. I establish thee as one of the glories of the earth…… I give thee flight without wings.”

Some grey Arabians are born with a reddish pigmentation on their shoulder. These horses are much sought after as they are believed to be direct descendants of a legendary mare. The story is of a Bedouin warrior and his loyal war mare. One day in a fierce battle the warrior was badly wounded and he fell across the neck and shoulders of his mare. The warrior was unconscious and many miles from home, however the mare balanced him across her shoulders and carefully carried him towards home. She went many days without food or water until she finally arrived. Unfortunately, the warrior was dead and when his family took him off the mare her neck and shoulders were covered in his blood. His family were very pleased that she had brought him home but they were worried that she was so weak that she would die or lose the foal that she was carrying. Eventually she recovered and gave birth to a healthy colt, which was born with the identical ‘bloody shoulder’ that his mother had from her master’s blood. The Bedouin believe that this is a gift from Allah and that having a horse with these shoulder markings is a sign of Allah’s favour.

What we do know is that 4,500 years ago the nomadic tribes, known today as the Bedouin of the middle-east desert regions, took their domesticated camels into central Arabia. It is believed that they also took the ancestral horses that would become the present day Arabian.

The Bedouin relied on their horses for success in battle and a great oral history of courage, speed and endurance was told and retold along with the genealogy (pedigree) of each of their mares.

The Bedouin always used mares in their raiding parties, as they would not nicker to the enemy's horses and therefore lose the element of surprise. The best war mares had to have great courage to stand their ground in the heat of battle. They also needed speed and endurance as the raids were usually undertaken a long way from home. These mares were highly prized and often lived inside the owner's tent with his family. This would protect them from the hash climate as well as possible theft. This close relationship with the Bedouin required all the mares to have a calm and trustworthy temperament. Only mares with these traits were bred as war mares. Stallions were of little importance to the Bedouin and were only required to be ‘Asil' or ‘pure-blooded' Arabian so as not to contaminate the purity of the mare's bloodline.

The selection of these traits (speed, stamina, courage, calmness and loyalty) over thousands of years has delivered a horse, not only of great beauty, but remarkable physical traits. Although the Arabian looks very light its bone is very dense, giving it great strength. Arabians also have a slower resting heart rate, which returns to a normal rate faster, than most other breeds, after periods of great exertion. These characteristics make the Arabian and Arabian/Thoroughbred cross the best horses for the sport of Endurance Riding.

Islamic people believed that the Arabian horse was a gift from Allah (God) so religious beliefs and traditions led to selective breeding for such things as the ‘Jibbah', the bulging forehead and the ‘Mitbah', the high crested long arching neck. The bulge in the forehead was supposed to contain the blessings of Allah so the bigger the bulge the greater the blessings. The high crested neck was a sign of courage, while a high tail was a sign of pride. All these traits were bred into the Arabian well before it emerged from the dessert and was recognised by western visitors to the Middle East.

Today the Arabians physical characteristics are a refined, wedge-shaped head, large eyes, large nostrils and small muzzle. Most, but not all, have a concave or ‘dished' profile a slight forehead bulge between the eyes. The best will also have a long arched neck with a clean throatlatch. The cannon bone is short, good quality hooves and a short, broad back. The breed standard today requires the Arabian to be between 14.1 and 15.1 hands.

Purebred Arabians can be bay, chestnut, grey, black or roan. All Arabians regardless of their coat colour have black skin so even grey/white horses have black rather than pink skin.

There are five main families or strains of the Arabian breed. These are known as ‘Al Khamsa' which relates to the story of the Prophet Muhammad and his five favourite mares. As the legend goes these five mares established the five main strains, which are; Kehilan, Seglawi, Abeyan, Hamdani and Hadban. There are also lesser strains and sub-strains however, the main strains developed very distinctive characteristics that could be easily recognized.

Kehilan. This strain has a deep chest, masculine power and size. They stand about 15 hands with a short head, broad forehead and very wide jowls. The most common colour was grey and chestnut.
Seglawi. This was a very refined, elegant and feminine strain noted for their speed rather than endurance. Seglawi are finer boned with longer faces and necks. They stand about 14.2 hands and are commonly bay in colour.
Abeyan. This strain is similar to the Seglawi so they are refined, light and small. They have a longer back than most Arabians and are usually grey with more white markings.
Hamdani. These Arabians were considered plain, with an athletic, masculine rather large boned frame. Their head was often straight in profile, lacking the ‘Jiddah’ (bulge between the eyes). This strain is the largest standing around 15.2 hands. The most common colours are grey and bay.
Hadban. This is a smaller version of the Hamdani standing about 14.3 hands, with big bones and muscular build. They are also known for their extremely gentle nature. The main colours are brown and bay with few if any white markings.

Wars, trade and travel have continued to shrink the world. In the 16th and 17th Century the great Ottoman Empire controlled areas of Southeastern Europe, western Asia and North Africa. During this time the Turkish rulers of the Ottoman Empire started to send Arabian horses as gifts to European heads of state. Other ‘Oriental' horses (Arabians, Barbs and Turkomans) were either captured in wars, purchased or given as gifts for diplomatic reason.

The Thoroughbred horse was developed in England from three main stallions, the Byerley Turk in 1690, the Darley Arabian in 1704 and the Godolphin Arabian, which was also described as a Barb, in 1728. The Arabian breed has either directly or indirectly, through the Thoroughbred horse, been used to add refinement, speed and stamina to all light horse breeds that we know today.

If we walk through an Art Gallery and look at paintings from the 17th, 18th and 19th Century we will see well known figures in history riding horses with the distinctive physical appearance of the Arabian. These include Ghenghis Khan, Napoleon, Alexander the Great and George Washington.

Watch some beautiful Arabian horses in action in these great videos.