Understanding how a horse sees, what it sees and what it doesn’t see is so important to the way we handle horses and what we ask them to do. 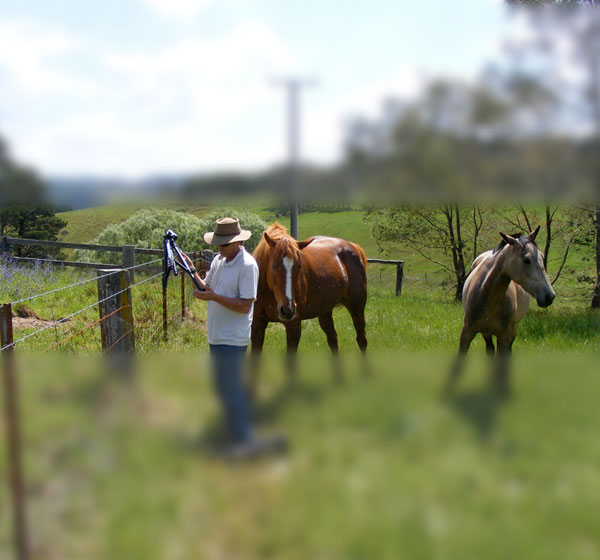 When you look at the structure of a horse’s eye it has a small area for distinct (clear) vision and the rest of the eye only offers indistinct (unclear) vision. Distinct or clear vision comes from a horizontal strip in the centre of the eye that has a high number of ganglion. Outside this strip the horse only sees motion or movement, not clear, distinct objects. Once alerted to movement the horse moves its head around so it can see the object clearly by looking through the strip in the centre of its eye.

Scientists have also found a number of cones in the horse’s eye which indicate limited vision. Other structures called rods are also found in their eyes. These give horses excellent night vision, which is better than ours but not as good as a cats. Although they are very good at seeing in the dark their eyes are slow to adjust between light and dark.

Unlike humans, horses’ eyes are set on the side of their head which gives them almost 360° of vision. This vision is made up of ‘binocular’ vision, which is seeing with two eyes together, and ‘monocular’ vision, which is only seeing with one eye. When a horse sees with two eyes it can judge the distance between itself and the object, which it cannot do with one-eyed vision. The position of the eyes, also means that horses have blind spots. These blind spots are directly in front and directly behind the horse. When working with horses you must be very aware of avoiding the blind spots or at least talk and touch while you move through them.

Horses’ eyes are also positioned high on their head which allows them to see further even when they are grazing. This means the horse can detect movement across great distances. However, unless he turns and faces the movement, he cannot see it clearly or judge how far away it is. The position of horses’ eyes as well as their structure is all about detecting movement and reacting to it. This is why horses are particularly unpredictable on windy days. From a horse’s point of view, objects that are usually still but are now moving are threatening. At that point, 55 million years of survival instincts can take over!

When we ride horses we can also impact on their vision. If we allow a horse to have a ‘natural’ head carriage, it can fully use its binocular vision, which allows the horse to see further, see objects clearly as well as judge their distance. When we put a horse ‘on the bit’, we restrict its vision, which means we have to use our own eyes to detect obstacles and uneven ground. If we bend a horses neck too far under (called ‘under the bit’) we virtually blind the horse and leave it with only one-eyed (monocular) vision, which can only detect movement, blurry objects and no way of assessing distance.

If we understand how a horse sees their environment and why they react the way they do, we can work with them in a more realistic and safer manner. Exposing a horse to different objects and environments will help the horse to approach these situations in a more relaxed manner. It is up to us to stay calm and minimise stress if we want our horse to trust our judgement rather than its own.

Poor eye health and disease can lead to reduced vision, even blindness in your horse. To learn more, take a look at the article on ‘Eye Problems’.

What a horse sees