Just think of a big, jet black, powerful, elegant horse with a long flowing mane and tail and you are probably thinking of a Friesian. 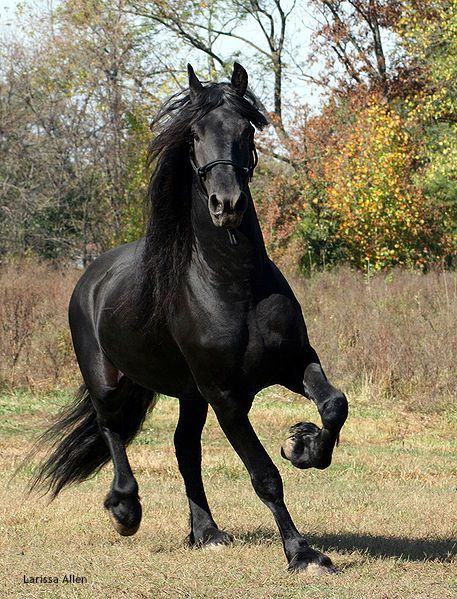 They can also be called Frisians or Belgium Black (UK) and they originated in Friesland, which is a north-western province of the Netherlands. The extra ‘e’ in the name was due to the fact that many Frisian horse breeders also bred Friesian cattle. The ‘Friesch Paarden Stamboek’ (stud register) originally included both cattle and horses, so the spelling was made the same, especially by English-speaking societies and registers.

Origins of the breed

There is evidence of horse populations in the Netherlands for thousands of years, and it is believed that the Friesian descended from primitive forest horses. It is also suggested that the Romans took some ancestors of the Friesian horse to England in the 1st and 2nd Centuries AD and that they influenced the Shire Horse, Clydesdale, Fell Pony and Dales Pony.

Many historians believe that during the Middle Ages the ancestors of the Friesian were used as war-horses throughout Europe. Due to their size and strength they could carry a knight in armour, however war-horses in the late Middle Ages seemed to be heavier draft animals.

During this time, horses were identified by their type, use, origin or breeder – breeds, as we know them today, didn’t really exist. For instance, Spanish horses referred to any horse from Spain, ‘destriers’ were particularly fine war-horses that were distinguished by their strength, musculature and training rather than any particular bloodlines. They were usually stallions, highly prized, very expensive and few in number. Whether the ancestors to the modern day Friesians were the legendary ‘destrier’ we don’t know, however it is unlikely that ‘destriers’ were purely from one bloodline or location. 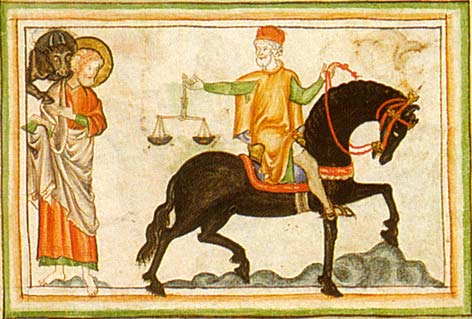 Artworks can also give us some clues about the type of horses used. In the 13th Century illustration of the Apocalypse rider (above), the horse closely resembles a Friesian type: black, long wavy tale and mane, feathers around its fetlocks, powerful hindquarters and a long arched neck. Is it meant to represent a ‘destrier’ (elite war horse), or a ‘palfrey’ (riding horse)? 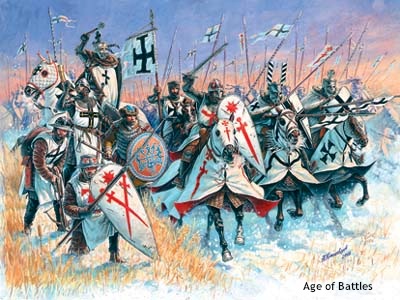 Trade and warfare have always played a big role in the development of the breeds that we know today, and the same is probably true for the Friesian. During the 12th and 13th Century the Crusades may have introduced some oriental bloodlines (Arabian, Barb, Turkaman or Akhal–Teke) and during the 16th and 17th Century the war and occupation of the Netherlands, by Spain would have introduced Andalusian or Spanish Jennet bloodlines into the ancestors of the Friesian. These bloodlines would have lightened the breed and made them more suitable as a urban carriage horse. At this time they were also being used in French and Spanish riding schools for high-school dressage.

In the 18th and 19th Century the breed continued to be used as a carriage horse and for farm work, however as trotting races became popular the Friesian’s popularity grew. During the 1800s they were being bred lighter and faster for racing, and these horses may have been used as the foundation stock for the Dole Gudbrandsdal, the Norfolk Trotter (ancestor to the Hackney), and the Morgan.

A Studbook Society was formed in 1879 by Frisian farmers and land owners, who had gathered together to found the Friesian Cattle Registry. 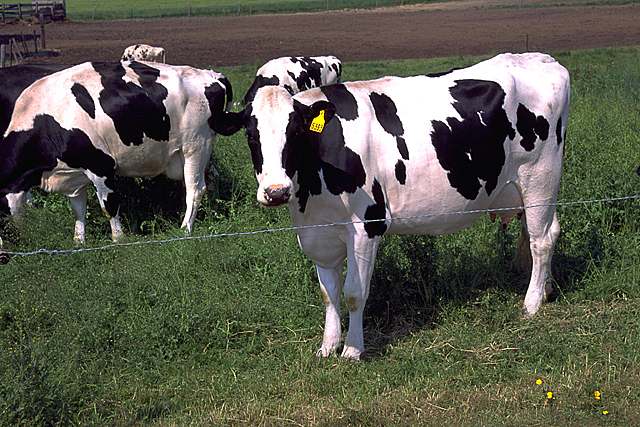 This registry also included Friesian horses as well as a group of heavy warmblood breeds. The purebred Friesian horse continued to decline due to mechanisation of farmwork, cross breeding for changing tastes, as well as the sale of stallions from the breeding area. 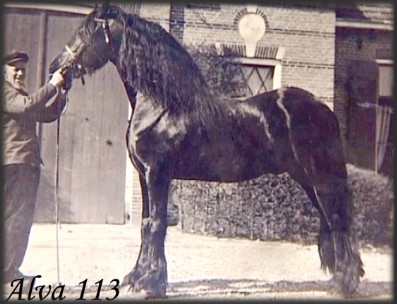 By very early in the 20th Century there were only three breeding stallions left. In 1913 another society was formed with the sole purpose of protecting and promoting the breed. During World War 11 (1939 – 1945) the sale and displacement of stallions and mares slowed down, allowing the breed’s popularity and numbers to rebound. At the beginning of the war, the Strassburger family fled Nazi Germany, while in Friesland they discovered that the breed had wonderful show qualities. They included them in their circus and demonstrated their abilities to a wider audience both during and after the Nazi occupation. 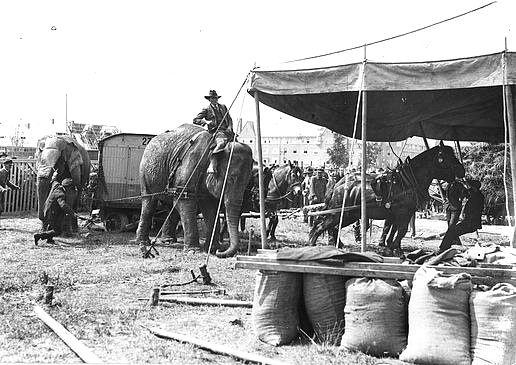 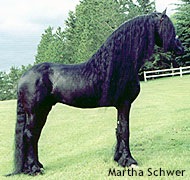 Up until the early 1900s about 20% were chestnut, bay, or grey, however black is now the only recognised colour. This may range from very dark brown, black bay to true black. White markings have been minimised by selective breeding and the only white marking that is allowed on a studbook-registered horse is a small white spot or star between the eyes.

Today, there are two distinct conformation types: the ‘baroque’ type, which is heavier and more like the original Friesian carriage horse, and the ‘modern-style’ type, which is lighter and finer boned. In the show ring today the lighter purebred horse is more popular, however both types are common and the correct movement is seen as more important than conformation.

The breed is characterised by a powerful presence, good bone structure, a long, arched neck, outstanding crest and a well-chiselled, short-eared, ‘Spanish-type’ head, which is carried quite high. Their sloping shoulders are powerful and their bodies are compact and muscular with sloping hindquarters and a low-set tail. The Friesian horse has a long, heavy mane and an extra long tail that is usually wavy. Their limbs are comparatively short and strong with a high-stepping knee action and energetic hindquarters.  To be accepted into the studbook, stallions and, to a slightly lesser degree, mares, must pass a rigorous approval process. 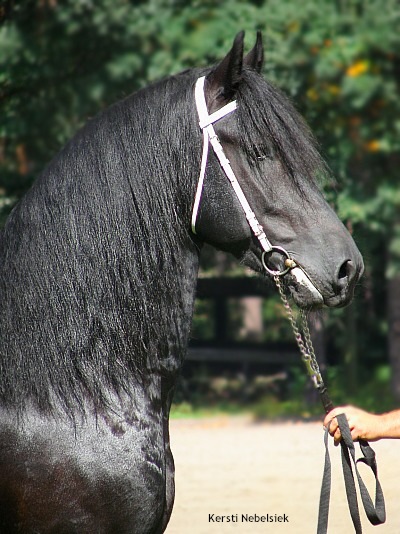 Today the ‘modern-style’ purebred has continued to grow in popularity along with cross-breeding to produce an even lighter horse, which retains many of the Friesian’s characteristics (particularly its wonderful temperament). These crosses have resulted in the Friesian Cross and the Friesian Sporthorse. The Friesian is popular in Europe and the United States, and is often used for Dressage, pleasure riding, driving and Carriage competitions. While the Friesian Sporthorse is specifically bred to excel in all FEI recognised disciplines, such as Dressage, Jumping and Eventing, and is very popular in the US, Canada and Germany. 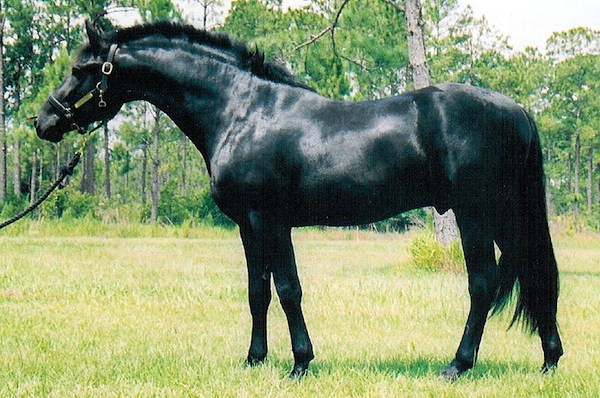 This beautiful, flashy breed has also become popular in the film industry. With appearances in such movies as Ladyhawk, Eragon, The Mask of Zorro, Alexander and The Chronicles of Narnia, the Friesian horse is more popular than ever.

Big, powerful, beautiful Friesians… watch some of them in action here.