The most important thing to remember is that all breeds today are the one species known as Equus ferus caballus. The diversity of the more than 350 breeds is, we think, due to a number of factors over millions of years… 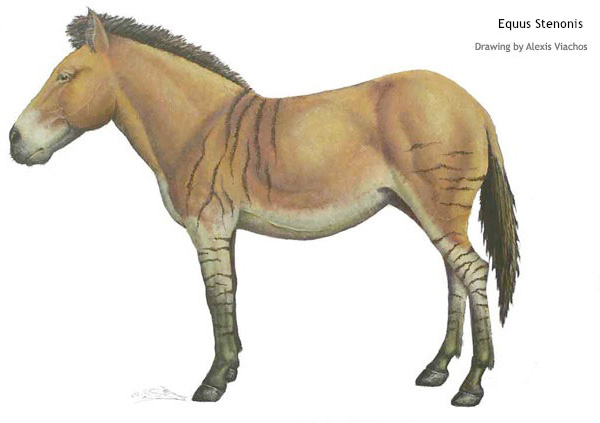 4,000,000 years ago:
The original splitting of Equus Stenonis into two groups (light types and heavy types)

630,000 years ago:
The continuing diversification of Equus ferus due to geographical isolation and natural selection

100,000 years ago:
Migration of herds due to climate change during and after the last ice age, which ended about 10,000 years ago

6,500 years ago:
Possible domestication of horses and trade between people from different regions

5,500 years ago:
Using horses as a work animal, pulling carts and sledges

3,500 years ago:
The use of horses had exploded all over Europe, as a military animal to pull chariots: 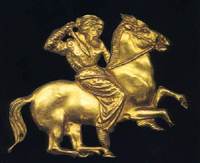 Note: These dates are approximations and rely on archaeological evidence and interpretation and may change as new evidence becomes available.

For as long as we have found horses useful for either work, travel or warfare we have been selectively capturing and breeding them. The types of horses that have developed would have been originally based on the available wild herds of those regions, however trade and warfare would have seen horses move out from their original homelands. Different types of horses would have developed due to their use as well as their suitability to the terrain and the climate of that area.

It wasn’t until the 1700s that people established Stud Books and started to breed for purity of particular blood lines. So the idea of ‘Breeds’ has only been around, in western society, for about 300 years.

A horse is defined as a horse, rather than a pony, if it is over 14.2 hands. Horse breeds, just like Pony breeds, have specific physical traits, these include lighter bones, narrower barrels, longer and finer necks, finer and longer heads and longer legs in proportion to their height.

This issue, of whether a horse is a pony or a horse, can be quite controversial. For example, most of the registries for the Icelandic breed call it a horse even though it rarely exceeds 14.2 hands.

When we look at the Icelandic’s phenotype (physical conformation) it is easy to see pony characteristics. For this reason we have left both the Icelandic and Fjord in the horse section, but we have also included them in pony breeds.

Although most people use size as the main difference between a horse and a pony, the most important difference lies in the pony’s conformation.

All ponies are very strong for their size and all are good ‘doers’. This means that they require less food to meet their needs and can withstand more severe climates. This is very important to understand, as many pony breeds cannot digest and utilise high starch diets. Rich food (and too much of it) can lead to illness and possibly death. The ancestors of the ponies we know today would have developed these physical traits by evolving and adapting to very harsh conditions over many thousands of years.

A pony should not exceed 14.2 hands, however in Australia the pony classification only goes up to 14.0 hands and horses between 14.0 and 15.0 hands are called Galloways.

‘Colour Breeds’ are not breeds that are based on purity and type but rather a colour or range of colours.

The colour registries usually accept any breed of horse or pony as long as it the right colour.

Dun (all of these colours are classified as 'dun'):

When we refer to a type of horse we usually mean horses with a similar physical appearance or a similar use.

A ‘type’ of horse can include several breeds as well as horses that have no registration or pedigree.

Baroque:
This includes Lipizzaner, Fresian, Andalusian and Lusitano as all these breeds are heavily muscled, powerful and used in Classical Dressage.

Feral:
Any once domesticated horse or pony that now lives in the wild.

Gaited:
This includes Tennessee Walker, Paso Feno, Icelandic and many others that have an extra four-beat ambling gait.

Hack:
Any horse that is used for riding.

Hunter:
A type of jumping horse that usually has some Draught in its breeding. It should be heavier boned than a hack, and have a higher knee action to travel safely across uneven terrain and jump cross country obstacles.

Iberian:
Includes all horse and pony breeds that were developed in the Iberian peninsula (Spain and Portugal).

Oriental:
A large number of ‘hot-blooded’ breeds all descended from the original horses of the middle east and Asia. They include Arabian, Ahkele-Teke, Jaboud, Turkoman to name just a few.

Sport Horse:
Includes all breeds suitable for use in international competitions run by the FEI.

Stock Horse:
Includes any breed capable of working cattle. The Australian Stock Horse is a specific breed as well as a type.

Warmblood:
A group of Sport horse breeds developed for Dressage and other Olympic disciplines. They were originally developed by crossing ‘cold-blood’ Draught types with ‘hot-blood' Oriental types, thus the term Warmblood.

Coldblood:
This term relates to any of the Draught blood lines that evolved in the cold climates of northern Europe. These horses were thick skinned with heavy coats, strong bone, great strength and a calmer temperament.

Hotblood:
The Oriental breeds are called hot-bloods because they evolved in the hot regions of the Middle East and Asia. They have thinner skins, fine coats, lighter but strong bones, speed, stamina and a more fiery temperament.

Gelding:
A male horse that has been castrated (gelded). Castration is an operation that surgically removes the testicles. This can be done before a colt reaches sexual maturity or any time after. The most important thing is that both testicles need to have descended into the outside sac.

Stallion:
This is a male horse, four years or older, that has not been castrated (gelded).

Colt:
A male horse under four years that has not been gelded

Ridgling (Rig):
A male horse where only one testicle has descended and the other remains in the internal cavity. It may also refer to a poorly castrated horse that still behaves like a stallion.

Mare:
A female horse that is four years of age or older.

Filly:
A female horse under four years of age.

Foal:
A male or female that is less than one year old.

Yearling:
A male or female that is one to two years of age.

Take a look at some wonderful videos on some of the different breeds of horse, including the Gypsy horses.