Basically, this theory states that four subspecies of horses developed across Europe and Asia. Through the process of natural selection they had evolved to be well adapted to their different environments. This meant that they had very obvious physical differences. 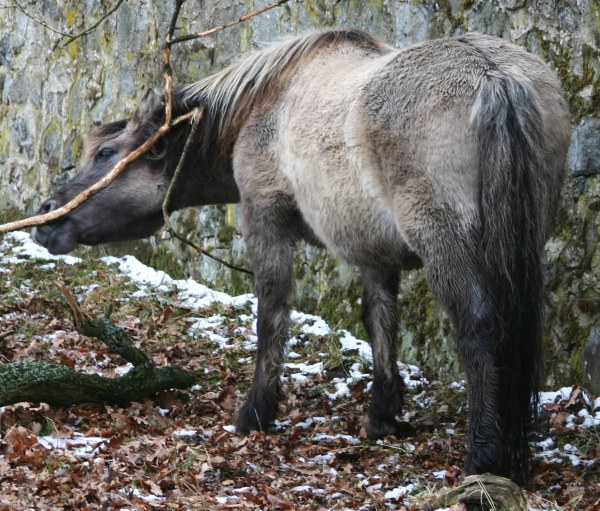 Pony Type 1:
It is suggested that this type evolved from the Tarpan and established itself in north-west Europe. It was a small, sturdy pony well adapted to the wet cold conditions with a thick skin and hairy coat. The closest modern type would be the Exmoor pony.

Pony Type 2:
This was a slightly larger,heavily built pony which lived in northern Eurasia. It had a heavy head with a convex profile, dun coloured coat with a dorsal strip and looked more like a small draught horse. We can still see these characteristics in the modern day Highland and Fjord ponies.

Horse Type 3:
This horse lived on the steppes (plains) of Central Asia and may have extended as far as Spain. It had a thick skin but fine coat to withstand heat and drought. It was taller with a long narrow body and neck. It is believed that this is the main ancestor of the Turanian horse in all its forms and its characteristics can be seen in the Akhal Teke of Turkmenistan and, possibly, the Sorraia of Portugal and Spain.

This horse lived in the same area as Type 3. It was smaller and had a more ‘refined' body, neck and legs. Its coat, mane and tail were finer and it had a straight profile. It was well adapted to its hot environment. The Tarpan is believed to have had a great influence on this horse and its characteristics can be seen in the Arabian and Caspian horse.

Care must be taken with the ‘Four Foundation’ theory, as there are a number of conflicting descriptions and origins for each of the four types. The most important thing to remember is that this theory is meant to describe a process that occurred after the last Ice Age (about 10,000 years ago) and a long time before man domesticated horses.

In fact, scientists have proved that Arabians, Caspians, Akhal-Tekes and all Oriental breeds are from common ancestors.

Biologists at the Uppsala University in Sweden studied the mitochondrial DNA (mtDNA) of 191 pedigreed horses; primitive horses from England and Sweden; Icelandic horses brought in by the Vikings; DNA from Pleistocene horses that had been preserved in the Alaskan permafrost for more than 12,000 years; as well as samples from archaeological digs that were 1,000 to 2,000 years old.

Mitochondrial DNA is found in all the cells of our body as well as our reproductive cells - the ovum (egg cell) in females and the sperm cells in males. It is contained in an organelle, called a mitochondria, which is a small organ within a cell separately enclosed by a membrane. Other organelles within our cells are the nucleus, which contains almost all of our DNA as well as ribosomes. All organelles contained in our cells are suspended in cytoplasm. When fertilisation occurs, 50% of the DNA in the sperm and 50% of the DNA in the ovum combine to create an embryo. This combined DNA comes from the nucleus of both the ovum and sperm. The mitochondrial DNA is different, it does not combine as only the mother's mtDNA, found in the ovum, is passed onto her children. So a brother and sister will have the same mtDNA from their mother. If they have children the girl will pass her mtDNA to her offspring but the boy will not pass his mtDNA to his children. The boy's children will carry the mtDNA from his female reproductive partner. The mtDNA allows us to track our ancestors through the female line. If we wish to track the male ancestral line we can use the Y-mrca which are the genes found on the Y chromosome, which is passed from father to son.

The results indicated that there would need to be at least 77 different ‘ancestral' mares from 17 distinct lines to account for the genetic differences in the present day mares that were tested. It is interesting that similar tests on cattle, sheep, water buffalo and pigs found that they are far less genetically diverse from their ancient ancestors. This information would indicate that a large number of ‘wild' lines were involved in the evolution of the female ancestors to the modern horse. In fact, there is more diversity than in any other domesticated animal studied to date!

It is believed that horses were domesticated between 6,500 and 4,500 years ago. Originally wild horses would have been captured and kept for meat and hides but once people started to use them as a work animal there would have been a greater need to selectively breed for the purpose they had in mind. Of course, this is the subject of ongoing research by palaeontologists, archaeologists and geneticists.