When the King married Catherine of Braganza in 1662, part of his dowry included Bombay (then the capital of India, now known as Mumbai) and Tangiers (a city on the North African coast of Morocco).

King Charles then imported a number of mares from Tangiers which became known as the ‘royal mares’. These mares would have been Oriental horses such as Barbs, Arabians, Turkomans and Akhal-Tekes. These mares, along with some native English mares, formed the foundation stock that were later bred with imported Oriental (Middle-Eastern) stallions to develop the Thoroughbred breed. 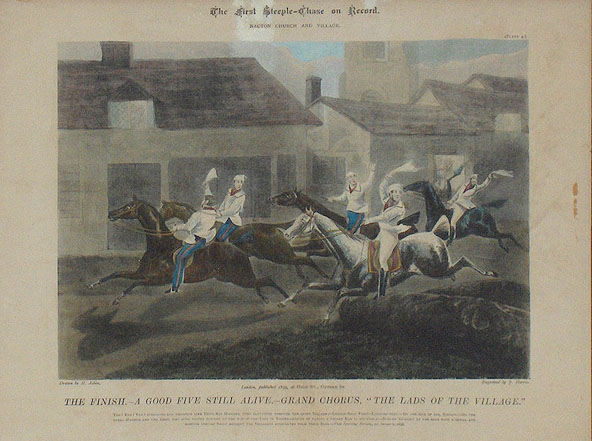 The breed of the three imported stallions is controversial. Many passionately believe that they were all ‘Asil’, pure-blood, Arabians. This has been questioned and much evidence indicates that these stallions may well have been Turkoman, Barb and Arabian. All of these breeds are referred to as ‘Oriental’ which is probably the safest description. One thing that cannot be argued about is that these ‘Oriental’ mares and stallions brought speed, stamina and refinement to the breed.

The first of these stallions was a remarkable horse, which was later named Byerley Turk. He was born in 1678 as a military mount of the Ottoman Empire (Turkish Empire). In 1683, in his diamond and ruby-studded harness, he fought in the Siege of Vienna (a famous battle between Hungary and Turkey, which the Turkish army lost). He was then captured at the Siege of Buda as an exotic prize and was ridden across Europe to the Royal Barracks of King James II, in Hounslow, England. The stallion was then acquired by Captain Robert Byerley, in 1687, who used him as a ‘charger’ in the Battle of the Boyne, in Ireland, as well as racing him and winning the King’s Plate at Downroyal. Byerley Turk died at the age of 25 years having established the ‘Herod’ and ‘Highflyer’ line of Thoroughbreds.

In 1704 Thomas Darley imported a stallion from Aleppo, in Syria. While Darley was the British Consul in Syria, he is said to have seen the colt as a yearling and agreed to pay 300 gold sovereigns to Sheikh Mirza 11 (a Fedan Bedouin chieftain). While he awaited delivery of the colt he learned that the Sheikh was not going to honour their deal. Thomas Darley obviously had some interesting connections, because he arranged for some sailors to ‘acquire’ the colt, by any means possible, and smuggle him out through Smyrna, on the coast of Turkey. The colt was sent to his brother, Richard Darley at Aldby Hall near Leeds. He was called the Darley Arabian and remained at Aldby Hall until he died at the age of 30 years. Today 95% of Thoroughbreds trace their direct male line to the Darley Arabian. He sired an amazing number of famous racehorses such as Flying Childers and, through his line, such horses as Old Shale who became the foundation sire for the Hackney breed as well as Messenger who was the foundation sire for the American Standardbred.

The third foundation sire was called Godolphin Arabian (he was also called Godolphin Barb). He was born in Yemen (Arabia) in 1724 and later sent to Syria (Middle East) and from there he went to Tunisia (North Africa). He was one of four horses to be given to the King of France by the Bey of Tunis (Bey was another name for Governor). Three of the stallions were taken to the Brittany forests and let loose to improve the local stock. No one knows how William Coke, an Englishman, saw and bought the fourth stallion but many believe he acquired the horse through an old school friend, Francis the Duke of Lorraine. Coke sent the horse to his estate at Longford Hall in Derbyshire around 1730. Coke died in 1733 and left the horse to Roger Williams who in turn sold him to Francis, the second Earl of Godolphin. The horse was known as the Godolphin Arabian from that point on. He became a very successful sire and his offspring established the famous ‘Matchem’ line.

The Godolphin Arabian died at Gog Magog, near Cambridge in 1753, aged 29 years. He was given a ‘wake’ and buried under the gateway of the stables with a stone slab marking the spot. It is said that his best friend, the stable cat called Grimalkin, died of grief shortly after his death.

Today the Thoroughbred horse is best known for racing, however the breed is also used for eventing , showjumping, dressage, polo and fox hunting. The breed is also crossed with other breeds to create new breeds or to improve existing breeds. Thoroughbreds have had a great influence on such breeds as the Quarter Horse, Standardbred, Hackney, Anglo-Arabian and Irish Sporthorse as well as some Warmblood breeds and possibly the Morgan.

A thoroughbred horse can range from 15.2 hands to 17.0 hands (average about 16.0 hands). They are usually bay, brown (dark bay), chestnut, grey and black. Rarer colours are roan, palomino and white. The face and lower legs can have white markings, however body colours such as Pinto and Appaloosa do not exist in Thoroughbreds.

Good quality Thoroughbreds have a refined head set on a long neck. Ideally they have high withers, deep chest, a short back, good deep hindquarters, a lean body and long legs. Along with Arabians and other Oriental breeds the Thoroughbred is called a ‘hot-blooded’ breed. They are characterised by thinner and finer coats originally adapted for hotter climates but now the term is taken to mean horses that are agile, fast, spirited and bold.

Should you Buy or Adopt an Ex-Racehorse?

According to Chris Newton, DVM, veterinary partner at Rood and Riddle Equine Hospital in Lexington, Kentucky, ex-racehorses can make great sport horses. However, you should be very careful and assess their temperament, medical condition and conformation.

As with all horses that have a history of intensive training and competition, Thoroughbreds that have raced might have sustained mental and physical injuries that will affect their soundness and strength as well as their temperament. This can lead to either disappointment or an increased risk to the younger rider.

Newton listed several conformation faults to avoid when choosing a Thoroughbred for a sport horse career. These include severely underrun heels, severe toeing in, dropped fetlock, severely back at the knee, severe sickle hocks, and horses with long backs. Some other conformation problems may not be so bad as long as they are only mild such as, bench knees, cow hocks, knock knees and club-feet.

These are all conformation faults that you would be trying to avoid anyway, however when you combine severe faults with a history of hard physical work which involved pounding on their legs, the horse’s long-term soundness is questionable.

Even if the horse is a ‘free adoption’ these problems can result in large vet bills and a lot of time when the horse is unusable. Of course, if you only want to do a bit of lower-level Pony Club activity or trail riding, then temperament may become more important than manageable injuries.

Newton’s key message is never to buy or adopt a horse without getting a veterinary examination. This will include a physical examination, flexion test of limbs, neck, back, and pelvis, behavioural and temperament evaluation, soundness evaluation, and lungeing (longeing) with tack to evaluate the horses behaviour under saddle. There are also other tests, such as X-Rays, ultrasounds, airway examination, blood work, bone scans and drug screens, however these are expensive.

To help the vet you should find out as much as you can about the horse:

How long did it race

The horse’s health history (such as colic, founder, tying-up)

The name and location of the horse’s past veterinarian

When you provide this information to your vet also tell him/her what you intend to use the horse for, this may have a major impact on the final report.

“Don’t look past ex-racehorses just because they’ve been raced,” concluded Newton. “Get help from a farrier, veterinarian and even a trainer and continue that teamwork for long-term success.”

Have a look at our article on Conformation for an explanation of these conformation faults.

Watch thoroughbred horses doing what they are best known for - racing! And watch a couple of other videos on this popular breed too