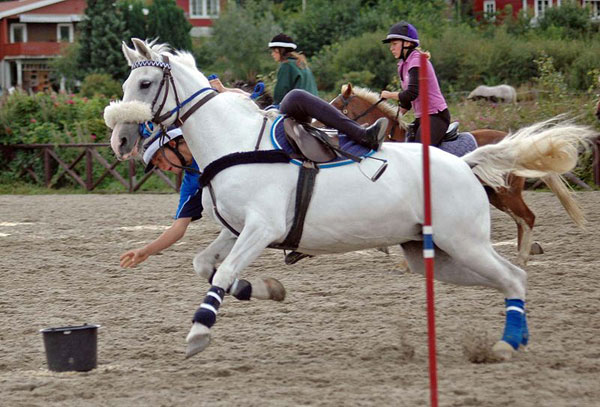 Mounted Games is an equestrian sport which owes its existence to a Colonel, a Prince, a prestigious horse show and the Pony Club movement.

Around 50 years ago, a request was made by Colonel Sir Mike Ansell, as the Director of the ‘Horse of the Year Show', to Prince Philip of England to devise a competition for children who could not afford expensive, well-bred ponies. And in 1957, the Horse of the Year Show staged the first Mounted Games Championship, with the winners receiving the Prince Philip Cup. When you look at the games that are played, you can see the military influence that Prince Philip and Colonel Ansell brought to the sport.

In 1984 Norman Patrick extended the sport of Mounted Games beyond Pony Club. He established the Mounted Games Association of Great Britain so that people of any age could participate. By 2003 the Association had extended to twenty countries on four continents.

Today Pony Clubs still use these games to develop the riders abilities and the horses training. Riders and horses need courage and determination as well as a good team spirit. But the most important thing of all is that they both love to play. A Mounted Games competition, at Pony Club, remains a sport were ordinary kids and ordinary ponies have a great deal of fun. Mounted Games is also an exciting spectator sport due to its speed, skill and team spirit.

There are about 40 different games that you can play and although they may look different they are all a combination of the same skills.

Handing over something to the next rider

Placing something into a container

Leading your horse from A to B

Leading a horse from your horse

Dismount and mount while the horse is moving

Using a lance to hit something on the ground

To play the games you need a large flat area with a good riding surface. It should be fenced to protect spectators and to contain the horses that are competing. You will also need lots of equipment, as every game is different, however only 10 games are chosen each year for official competitions.

On the day of the competition you need lots of helpers for mounted games. Apart from the horses and riders you need event organisers, scorers, gear checkers, team managers, gate stewards, lines people, timekeepers, scorers, equipment people, a starter and an adjudicator.

The event organisers do a lot of work before the competition communicating with other clubs and promoting the day. They also do all the paper work, determine the running order of the games and the rotation of teams in each game.

The gear checkers look at each horse and rider combination before they are allowed to compete. They make sure that all their gear is safe and comfortable and that they are not wearing spurs or carrying whips.

The team managers look after their team, making sure they are ready when called to compete. They also, usually with the help of the team, give each rider their position in each game.

Gate stewards make sure that the right teams enter the field of play and that they leave quickly and safely when the game is over.

Lines people watch each game and put their hand up if they believe a rider has broken the rules and should be disqualified. Every lane has its own timekeeper who use two stopwatches. When the race is finished they give the lowest time, for that lane, to the scorers.

The equipment people work very hard all day, setting up the equipment for each race. Each lane must be exactly the same and all measurements for the position of equipment must follow the rule book for that race.

The starter makes sure that all the teams are present and ready before he starts the race.

The adjudicator is an expert on the rules and regulations for playing mounted games and is only called on if a lines person puts up their hand. The adjudicator will decide if the error will result in disqualification.

A Mounted Games Team consists of five riders. Most of the games only need four riders so the fifth is usually a reserve, however the reserve must compete in at least three games out of the ten. Each rider knows whether they are riding in first, second, third or fourth position. The fourth rider is always the one to cross the finish line and win the race. The fourth rider wears a coloured cover on their safety helmet, which is the same as the lane colour. The timekeeper, for that lane, then knows to stop the stopwatch when the fourth rider crosses the line. In any team of riders different people will be better at some skills rather than others, so it is important to choose your best rider combination for each of the games. At club or zone level beginners and assisted riders will be encouraged to participate however at state, national and international competitions there are age restrictions and strict qualifying times for each race. This means that competition at these events is very fast, very skilled and very exciting.

Take a look at some short examples of some Mounted Games played at a local Pony Club, plus footage from the Horse of The Year 2007 Prince Philip Cup, as well as a video on the process of setting up for some Games…