Polocrosse is one of the most recent additions to the world of equestrian sports. It thrives in Australia, where it was first developed, and is increasing in popularity around the world with more than 10,000 players worldwide. 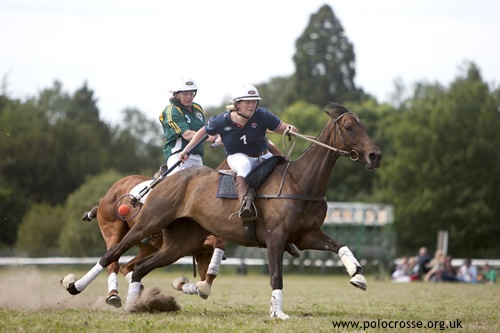 Polocrosse is an exciting, fast-paced team sport played on horseback combining the speed of polo, the strategy and tactics of netball (the field is also divided into three sections), and the ball handling skills of lacrosse. (Take a look at the video below from youtube.com/user/terranceian to get a good idea of what we mean about the ball handling skills!)

Polocrosse can be played by the whole family with players starting as six-year-olds and playing well into their sixties. With a ‘one horse to one rider’ rule the sport is also more affordable than Polo, making it popular with families. It is now a recognised Pony Club sport, and with 18 countries participating in open competition, it can be played at an international level for juniors, seniors and veterans. 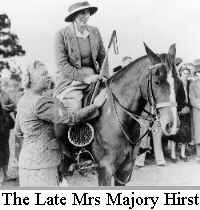 The odd combination of polo and lacrosse was first developed into the modern game of Polocrosse in 1938 when Mr and Mrs Edward Hirst from Sydney, Australia, travelled to England after reading an article about a similar activity in an English horse magazine. Whilst there, they visited Britain’s National School of Equitation to meet two instructors who had developed an indoor exercise to supplement their training at the riding school. This exercise was designed to help young riders take better control of their horses in a competitive atmosphere. Played indoors, with only two players a side, each competitor carried an old polo stick with a shallow string net attached to the head of a squash racquet. The aim was to scoop up the tennis-sized ball and ride with it to the goal, which resembled elongated basketball nets at each end of the arena.

Mr and Mrs Hirst realised the possibilities of this exercise becoming an outdoor sport and on their return to Australia, sought out the well-known horseman and polo player, Alf Pitty. After many hours of discussion and constant revision to the rules, they finally came up with a new and exciting game, which was called ‘Polo Crosse’. 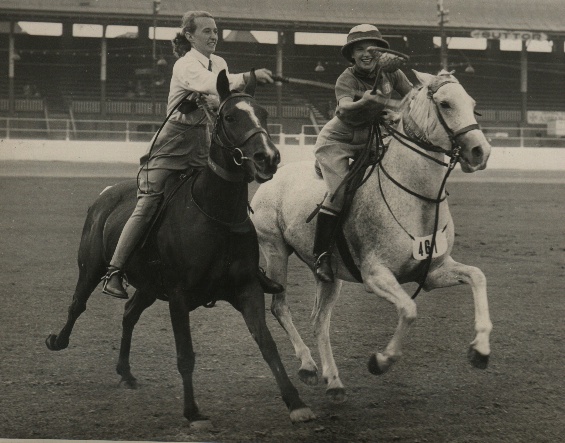 The first recorded demonstration of the sport was given by Alf Pitty in 1939 at the Ingleburn Sports Grounds, near Sydney. It attracted such interest among those who attended that, shortly after, a meeting was called at Ingleburn to start the very first Polocrosse club.

In 1945 the second club known as Burradoo was formed, almost 120 kilometres south of Ingleburn. Despite the distance, the first interclub tournament was held between Ingleburn and Burradoo the following year. After this, the game spread quickly around New South Wales, prompting Mrs Hirst to call a meeting to establish an overall controlling body for the sport. On October 17, 1947, the Polocrosse Association of Australia was formed. From this point on, the sport continued to spread across Australia and the world. And now, with over 5,000 members, in Australia alone and with over 10,000 members and 264 registered clubs worldwide, the sport is truly ‘Australian Made, Internationally Played’.

Polocrosse moved onto the world circuit in the 1950s when Zimbabwe, South Africa, Papua New Guinea and New Zealand picked up the sport. They were soon followed by Canada and America, in the 1970s. In 1976, at a meeting held in Queensland, Australia, the International Polocrosse Council (IPC) was formed, with Mr Max Walters, AM MBE, of Australia elected to the position of President. The council’s aim was and still is to hold and support international competitions, organise exchange visits of teams, draw up a common set of rules and to generally promote the sport.

The United Kingdom finally welcomed Polocrosse back in 1987, nearly fifty years after the Hirsts first saw the original training exercise. Max Walters (IPC President) organised an accredited coaching and umpiring scheme for the UK association. The sport was also introduced into the UK Pony Club movement and has since become a huge success, with many clubs practicing the sport to improve riding skills.

This proves that the sport of Polocrosse is now truly an international sport.

Polocrosse is played by people of all ages. In fact, children, parents and grandparents sometimes make up teams and play along side each other. It is this, along with the ‘one horse, one rider’ rule, that allows people from all walks of life to play the game.

The rules of play may vary slightly for Pony Club as well as National and International competitions, so please obtain the relevant rules from your association. 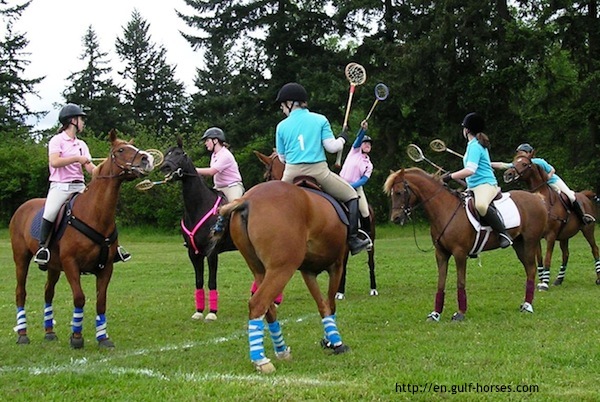 A Polocrosse team consists of six riders, which is divided into two sections of three players. Only one section (three players) of a team is on the field, and the two sections alternate at each stage of the game, and play in the opposite direction. There are a maximum of eight stages known as chukkas, which last for six to eight minutes, with two-minute intervals between chukkas. Each team has an ‘Attacker’ (number 1), a ‘Centre’ (number 2) and a ‘Defender’ (number 3). All the players must be clearly numbered. The 55m by 146.5m (60 yards by 160 yards) playing field is set up with three separate areas; the centre, where everyone can play, and the two goal areas. Only the defender and the opposing team’s attacker are allowed in the goal areas.

The game begins on the centre line of the field. Each team player lines up behind their number 1 as the ball is thrown over their heads, by the umpire. Riders must then attempt to catch or scoop up the ball in the net of their stick (also called racquets), and get it to the penalty line, which marks the section between the centre and goal scoring areas. The other team must try and get the ball from the opposition by using skill and strategy. They may hit at an opponents stick to dislodge the ball (rules apply), or force a player over field boundaries by blocking them, and they can also intercept the ball. Throughout the game, a mounted umpire keeps watch for unfair and/or dangerous plays, so as to keep the game as safe as possible for the horses and riders.

To score a goal, the player in possession of the ball must bounce or throw it across the penalty line to the Attacker (number 1). The number 1 player must then attempt to get the ball between the goal post, which are set 2.5m (approximately 2.7 yards) apart. A successful goal must be thrown or bounced, between the posts while standing outside the 10m (11 yards) semi circle. If the defender on the opposing team succeeds in preventing the goal, the game continues as normal. However, if a goal is scored, each team meets back in the middle of the field for another ‘throw in’. Each ‘throw in’ occurs on the opposite side of the centre after a successful goal.

A player can not change stick hands during the course of a game and the umpire and other players must be notified if a player is left handed.

No horse can play in excess of 54 minutes in any one day of competition.

This is not a comprehensive summary of the rules, so please check with your association for all the rules that will apply to you.

Polocrosse sticks, or racquets, can be any length, however the size of the netted head must be of a strictly regulated size (Pony Club regulations require the internal string area to be no more than 216mm in length and 184mm in width or 8.5inches by 7.2inches).

Unlike a Polo ball, which is hard, the Polocrosse ball is made of sponge rubber with a thick skin. The ball has a diameter of about 100 to 102mm and weighs between 142 to 150 grams. In competition the ball is usually white, however other colours are commercially available.

Saddles are usually ‘all-purpose’ or light-weight saddles, however specially designed Polocrosse saddles are available and very popular amongst serious competitors. All saddles must have a girth, surcingle and breastplate.

Fixed headchecks (standing martingales) are allowed and the horses bit must not have any protrusions.

It is strongly recommended that the horse’s legs are protected with either bandages or tendon boots as well as coronet boots (bell boots).

Given that Polocrosse is a recognised Pony Club activity, the sport is played on a wide variety of horses. In open competition there is no restriction on the horse's height or breeding, although the ideal should not exceed about 16 hands. 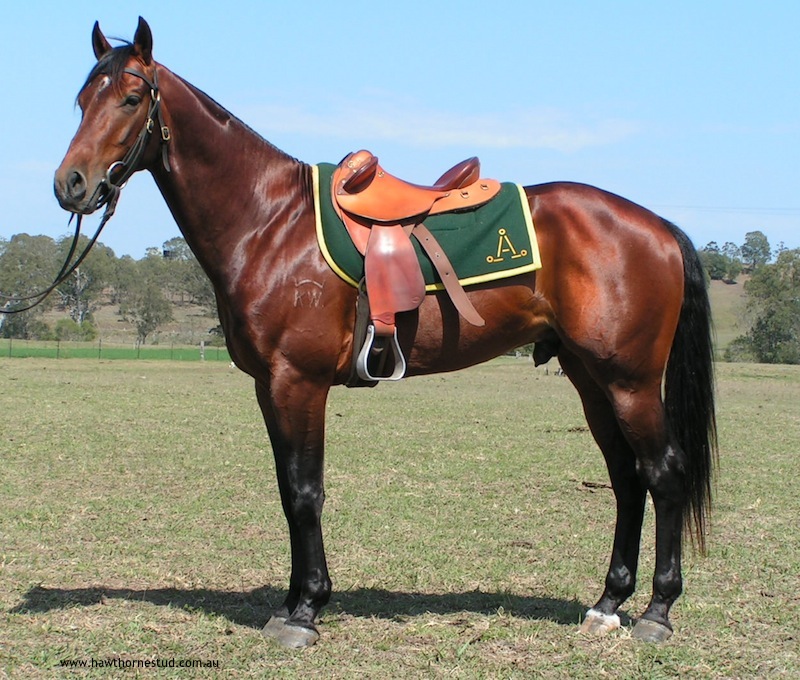 Regardless of the breed the serious competitor will need to train their horse using Dressage to establish their seat and leg aids, for the majority of the movements, as well as some Western riding skills for movements such as rollbacks.

The most important attribute a Polocrosse, or for that matter, a Polo pony needs to possess is a calm temperament. Your horse must be able to listen to your aids, not get too excited when things get fast or close, and to settle quickly. (Take a look at the videos on this page to get a better idea of the skills that are required.)

Comment: Whatever your skill level or level of competition, Polocrosse can deliver maximum fun, speed, adrenalin and skills development at a relatively small cost.