It is with great sadness that we have made the difficult decision to retire Headley Britannia, the worlds' best known event mare, from top level competitions and so she will not be given the chance to compete at the London Olympics later this year. Instead, the tiny, but big-hearted 19-year-old will be formally retiring at this year's Badminton Horse Trials. 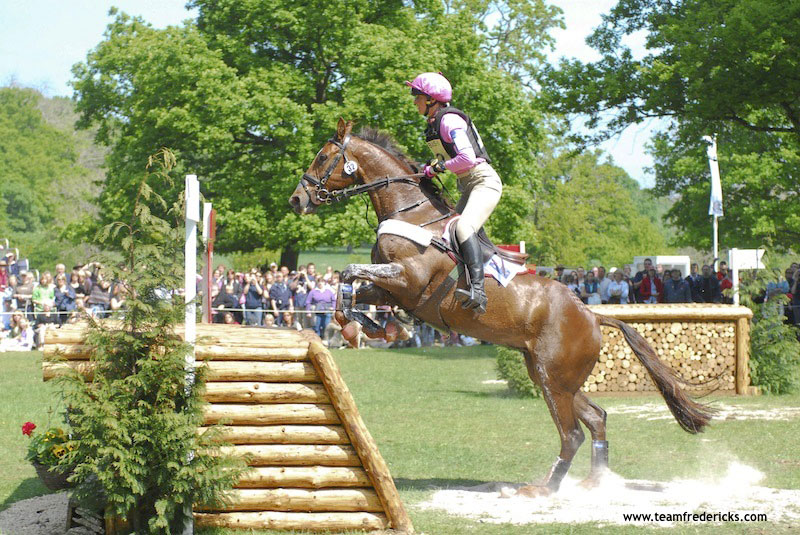 Team Fredericks have decided to draw a line under "Brit's" amazing career having felt the preparation runs required, in the lead up to a possible Olympic entry , would be too risky and would be one step too far for the plucky little mare who has made eventing history.

"It was a very tough decision not to aim for Olympic qualification, but she has done much more than I could ever have expected. She is so valuable to us that I could never forgive myself if I had asked her to compete one more time at this level and something had happened to her." said her owner and rider, Lucinda Fredericks.

"She has been a part of our family for 10 years and owes us nothing more". The little chestnut mare has certainly earned her place among the equine greats. "Her record is outstanding, starting with a win at the first event I rode her at in 2002 and the last event in 2011. In between she won Blenheim 4*, Badminton 4*, Burghley 4*, Rolex Kentucky 4*, the Hickstead Eventing Derby, 3rd Luhmuhlen 4* and a Silver Team Medal at the Beijing Olympics. It is very tempting to try one last time for Gold, especially as she is so fit and well, but she is very precious to our team and family and at her age have decided that to push her to the highest levels again will be too much to ask" Lucinda added.

For the last two years, Lucinda hasn't wanted to risk competing Brit on hard ground, as with her shorter legs and stride the 15.3hh mare has to work twice as hard as any other horse.

All this makes ‘Brit’ the only mare to win her own Rolex Grand Slam, a feat managed by only one other horse. She is also the current holder of the lowest finishing score at a four star, finishing on 32.3pen in Kentucky.

Always small compared to the competition, her competitive spirit, manoeuvrability, sheer guts and a Will To Win have propelled her to the top. The plan is to enjoy competing her at a much lower level, breed more foals by Embryo Transfer and eventually hand the reins over to 8 year old Ellie who is champing at the bit to take the ride on. "One final dream is for Ellie to have her first season of BE events on Brit. What a lucky little girl! - Ellie I mean! " said Lucinda.

It has been wonderful that Brit has been able to end her eventing career on a high at top level in a fit, sound and healthy state.

Team Fredericks will be offering breeders an exciting opportunity for embryo transfer with Brit by offering her ova to breeders in a similar way as sperm for AI. Ends.

• Headley Britannia's greatest accomplishments include a win at the 2006 Burghley Horse Trials, the first mare in 33 years to do so, a win at the 2007 Badminton Horse Trials, the first mare in 53 years, and a win at the 2009 Rolex Kentucky Three Day. She came third at the 2006 Luhmuhlen Three Day Event, a great accomplishment after having taken a fall the previous year on cross-country and then contracting a virus which nearly killed her. She was an alternative to the 2006 World Equestrian Games, but when not called, was switched to the Burghley Horse Trials. She is one of only two horses in history to have won all three of the top four-star events (Badminton, Burghley, and Rolex), and has had a Breyer model made of her. In 2007 her owners Katinka and Neil Thorburn gifted her to Lucinda Fredericks. Brit produced two foals by embryo transfer in 2008. Little Britannia and Britannia's Mail were sired by the stallion Jaguar Mail

• Lucinda Fredericks (born Lucinda Murray, 28 September 1967) is a champion equestrian sportswoman competing at the highest levels of equestrian eventing. She changed her nationality upon her marriage to Australian equestrian, Clayton Fredericks and now rides for Australia. The couple have a daughter, Ellie, and currently live near Wiltshire, UK.