Original story from TODAY.com (This story is reproduced without editing)

Tommasina Ashley was visiting New York City for her sister's bridal shower last Thursday when she received an unsettling text message. Her 30-year-old horse, Danny, had been found in his stall with a 9-inch piece of wood wedged into his skull.

Ashley was hours away from Danny's home at Amelia Acres, a Hudson Valley farm.  "I was in shock," the 42-year-old customer service representative told TODAY.com. "I was thinking, oh my God, he's had a stroke. It was a mess." 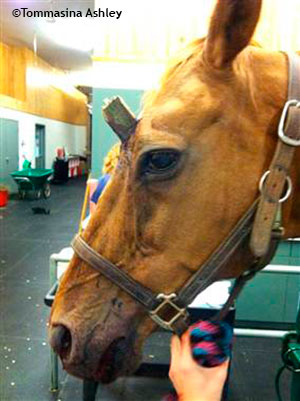 Miraculously, the wooden stake lodged in Danny’s forehead missed his left eye and brain by a few centimeters, rendering the caramel-colored thoroughbred in a foggy state of shock but still breathing.

Danny was rushed to Rhinebeck Equine, where doctors took X-rays and discovered the wood had broken through his skull and entered a pathway leading to his oral cavity. His surgeon, Dr. Shannon Murray, said she hadn’t seen anything like it since medical school.

Doctors had to remove several bits of bone, leaving Danny with a hole in his head that will take at least a couple of months to heal. But the retired show jumper remained docile and calm throughout the whole ordeal, even as he was forced to stand in place (with help from a sedative) throughout the surgery, Dr. Murray said.

“He’s a brave boy and was very good,” she added. “I almost think he knew we were intending to help him.”

This isn’t Danny’s first brush with death — and he does know a thing or two about hospitals. Only a year and a half ago, he had emergency colic surgery after a 4-pound tumor amassed around his intestines. It took months of rehabilitation before Danny was jumping through hoops for his favorite treat, powdered donuts, again, Ashley said.

Just how Danny managed to become temporarily transformed into a unicorn still remains a mystery. Dr. Murray speculated that stomach trouble or even a loud noise could have caused Danny to jump up too quickly and injure himself on the post. Danny’s owner simply feels relief that such a gruesome accident didn’t cut their 20-year relationship short.

“If there’s any way to drive a stake through your head, this is the way to do it,” Ashley marveled. 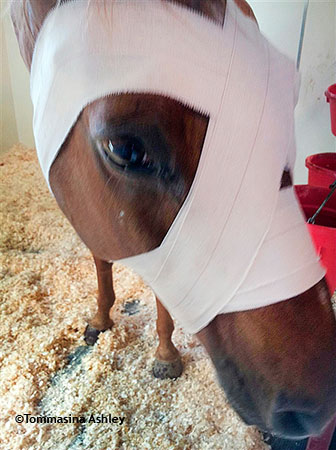 Over the last few days, Ashley has traveled to Rhinebeck from her home in Montvale, New Jersey several times, walking and feeding her injured horse. At first, Danny’s condition was discouraging — he couldn’t eat or relieve himself, and Ashley noticed how he’d grimace when stooping for a blade of grass. Though still in the first week of recovery, Danny now seems significantly better and has returned to what Ashley calls “his normal, bossy self.”

She says that Danny has taught her to never give up on hurt animals, no matter how daunting the injury may appear. “I want people to know that if this happens it’s not the end of the world," Ashley said. "You can fix catastrophic illnesses.”

Comment: We agree – don’t give up as long as the animal is not suffering or the quality of life is acceptable.