Story from HorseTalk.co.nz (This story is reproduced without editing)

Police horse Jeeves is dedicated to his calling, even when off-duty. His diligence has saved the life of an abandoned foal believed to be no more than 48 hours old.

Jeeves alerted rescuers to a tiny foal abandoned or lost on Sunday in South Norfolk, England. Redwings Horse Sanctuary is currently caring for the foal and is appealing for the foal’s owners to come forward. 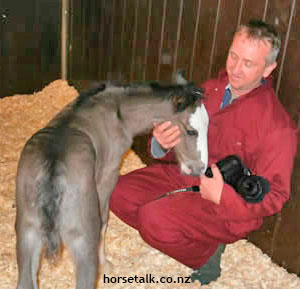 Jeeves, the partner of Mounted Special Constable Acting Inspector Richard Tallent, had been turned out after an afternoon patrolling the rural lanes of Norfolk. When he checked his horse after dark, Tallent noticed that the 14-year-old bay gelding was on edge and kept nervously looking to a neighbouring field.

Local police have been alerted, but the owner has yet to be found.

The foal, named Dodger by his new carers, is currently being looked after at Redwings’ headquarters in Hapton, South Norfolk, where he is receiving around-the-clock care and two-hourly feeding sessions from its vet team.

When found, Dodger was estimated to be less than 48 hours old. He was suffering from dehydration and may not have survived had Tallent and Jeeves not found him when they did.

“This is such a sad situation not just for the foal, but for the mare as well,” Redwings vet Eve France says.

“Her body will be ‘programmed’ to nurse a new foal, so she will be wondering where it is. Plus, she is at risk of mastitis as her milk will be building up, causing her discomfort.

“If the separation was done on purpose, to intentionally take a foal from the mare at such a young age is a completely heartless act.

“It will also cost us, a publicly funded charity, an average of £2000 to £3000 a year to look after this foal until he is ready to be re-homed, if he is suitable, at four or five years old. 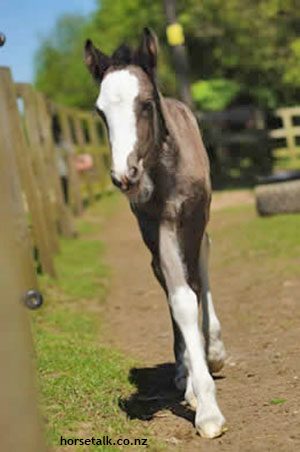 “Our message is always to encourage people to think about a foal’s future before even contemplating breeding from your mare. Abandonment is illegal, immoral and completely irresponsible.”

Tallent said: “It appears that the foal had been abandoned rather than lost, as so far no-one has come forward to report a lost foal. It is possible that the foal had simply been separated from its mother accidentally, so I would appeal to anyone with information to contact Redwings as soon as possible.

“Had Jeeves not reacted in the way he did, it could have been a very different story.”

Dodger is the second abandoned foal to join the 1200 residents at Redwings in the last two weeks.

Comment: We know that the economy isn’t great at the moment, but the UK has some of the best horse rescue organizations in the world… so why would anyone need to dump a foal. We don’t understand the motivation, however we are glad it had a happy ending… well done Jeeves.