Sourced from Sky News and AAP.com and The Ashbury Park Press 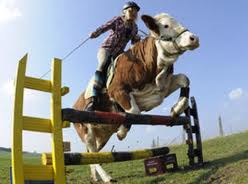 You may have already seen this story, but we were so taken with it that it had to be included in our News section.

Regina Mayer is a 15 year-old girl who really wanted a horse…but her parents refused…so Regina pulled Luna, the cow, out of the paddock and started to train her. Two years later, Luna is jumping obstacles and seems quite happy with all the riding, grooming and treats.

“She thinks she’s a horse,” says Regina, who lives in Laufen, southern Germany.

The pair began with gentle walks in the woods before Regina introduced her to a saddle. A few months later she hopped on her back for the first time, and now she spends most afternoons riding her and teaching her to jump.

Luna’s reward is lots of grooming and lots of treats.

Comment: Regina you’re a champion! Have a look at the video, it’s terrific!