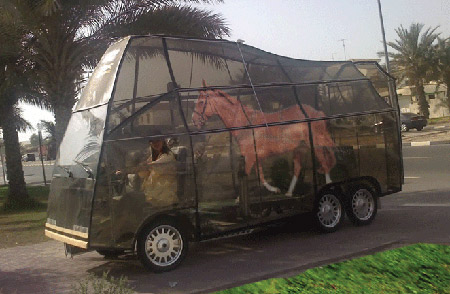 In the never-ending quest for more and more horsepower by some automakers, it’s unusual to see inventive, ecologically-friendly ideas for new propulsion systems. One firm however seems to have taken the low-horsepower hybrid car to the extreme. A Dubai group is proposing that their one-horsepower vehicle, supplemented by electric motors is the greenest transportation system available.

Called Naturcar, the concept hybrid is the brainchild of a group called Fleethorse, and as the name suggests, it’s powered by a horse.

Passengers sit in the front of the van, while the horse stands in the back on a conveyor belt. The Naturcar uses electicity to power motors on the belt that get the horse moving. If the horse stops walking the belt nudges it back into motion. The same belt moves the horse’s ‘exhaust’ out of the horse’s compartment into a holding area beneath the car.

Fleethorse says it has already thought of the animal welfare issues, and has a list of precautions, such as air conditioning to keep the horse cool, continual feeding and watering and temperature gauges to check on the horses health.

The photograph above is a mock-up – not a real horse!

How many of you thinks this is crazy, funny, strange, a joke, a stunt or the twilight zone?

Comment: They’re obviously clever people, but maybe they should put their considerable brainpower and resources into solar power and storage. Dubai is a state of the United Arab Emirates (UAE), so they have lots of money and, more importantly, lots of sunshine.