It all started, in January, when the New York Mounted Unit started to patrol the sidewalks on the weekends to control the crowds that were leaving bars and clubs on the city’s Lower East Side. 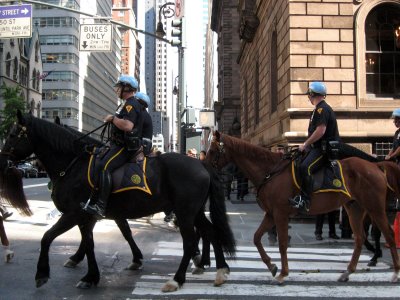 Unfortunately, after they finished their patrols and left the area they left something behind…POOP! Residents have started to complain about the pile of manure left outside their homes.

One bouncer, from a Lower East Side bar, described the scene outside his establishment as a ‘big buffet of droppings’ adding that the ‘mounties’ are just doing their job and keeping the neighbourhood safe.

One resident said, “It’s the same as dog poop…it’s smelly. I asked the cops, and they said it was biodegradable. It’s unfair that people have to pick up after their dogs, but the cops don’t have to pick the manure up.”

NYC Mayor Michael Bloomberg is sympathetic, even though his daughter is one of America’s top showjumpers. He has already had to cut the number of sanitation staff due to the city’s financial problems…so what does he do?

Comment: I suppose it wouldn’t be pleasant to step in manure if you were wearing sandals but really I love horse manure. It’s nothing like dog poo, dogs are carnivores and horses are herbivores so the smell and health issues are worlds apart. The residents should realise how good manure is to grow their vegetables and roses. How about setting up a community garden on a vacant block and everyone who wants to grow vegetables there has to pick up the poop and take it to the ‘community garden’ as part of their usage fee.

What do you think? Do you have a better solution?