OK, you’re driving down the M8 on your way into Glasgow and what do you expect to see? Well certainly not an enormous statue of a Clydesdale horse, but that’s exactly what stands on a hillock beside the motorway. 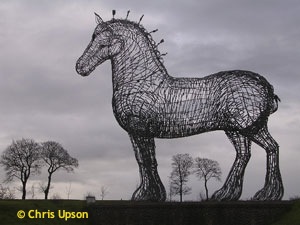 The heavy-horse statue was designed by the Glasgow sculptor Andy Scott, in 1997.

The Clydesdale breed was developed around this area and was enormously important in the building of Glasgow.

These gentle giants were extensively used for heavy good transport, agriculture and the steel industry. They were used right up until the 1960s when they were still a familiar sight pulling carts of milk and vegetables.

There is another fabulous sculpture of a Clydesdale by Scott in Boonah, Queensland, to celebrate its role in building Australia.

It should be remembered that Britain’s heavy horse breeds are under threat, with one classic breed, the Suffolk Punch, already reduced to a few hundred mares. The number of Shire horses and Clydesdales have also dwindled to such an extent that their very future is at risk.

Although heavy horses are renowned for their intelligence and gentle nature, encouraging more people to breed them in the UK has become increasingly difficult.