Dalma Rushdi Malhas has made history at the Youth Olympic Games, in Singapore, by becoming the first female competitor to ever represent her country at an Olympic event. 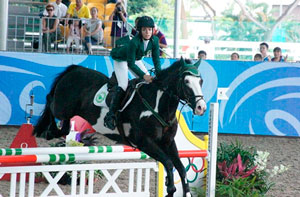 According to Arabian media, the 16 year old is participating on her own in the competition, at her own expense and is not part of the official youth team, participating in Singapore. Saudi Arabia has, until now, only allowed male competitors to participate in any major sporting event.

On Tuesday morning she succeeded in winning the Bronze Medal in the Equestrian Jumping Individual finals.

“I’m very happy that I got the chance to compete and change the way it’s been. I hope that this will be a door that will open many other possibilities for all other Saudi girls” she said

As you may remember from our previous Horse Talk stories, all the horses used at the Youth Olympics were purchased and trained in Australia then transported over to Singapore. You can see previous videos on their preparation, quarantine and transportation in our archived stories.

The Gold Medal went to Marcelo Chirico, from Uruguay, and the silver to Mario Gamboa, from Columbia. Australian Thomas McDermott rode extremely well and was in the jump-off  for bronze, unfortunately he faulted at the second last fence, ending his chance. We are sure to hear a lot more about Thomas in the future.